Brett Berry's "Why Was 5 x 3 = 5 + 5 + 5 Marked Wrong – Math Hacks – Medium" supports the scoring that red-penciled the answers to multiplication questions seen in http://imgur.com/gallery/KtKNmXG (you can read a negative article of this evaluation: Parents criticise US Common Core maths after third grade pupil told solution for 5+5+5=15 is incorrect | The Independent) and calls for the respect of teachers.
I fundamentally agree with Brett, and would like to present the pertinent information about (1) circumstances of math education and (2) multiplication available in programming languages.

By the commutative law of multiplication, 5 x 3 = 3 x 5 holds. And elementary school kids learn the law.
However, I have discovered examples which do not suggest that 5 x 3 and 3 x 5 should be same, from practical guides of math education.
Anghileri and Johnson (asin:0205110762 p.157) used children and candies: "For children, three lots of four and four lots of three are fundamentally different. They think in concrete terms---three children each having four candies are luckier than four children each having three candies although the total number of candies is the same." I have drawn a picture: 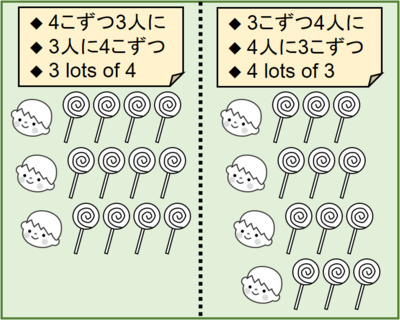 = 20 d) 4 + 4 + 4 + 4 + 4＝20." After describing the correctness of both b) and c) using tables, he however concluded that those expressions are different (p.146): "Twenty dollars cannot be 5 cars + 5 cars + 5 cars + 5 cars. Young students apparently are aware of this and never user procedure d. So there is a strong asymmetry between procedures b and c. They are not conceptually the same, although because of the commutativity of multiplication they may be mathematically equivalent." My understanding*1 is that when a kid answers 5 x 4 to the Connie's payment question in a classroom, another kid might say that the formula means 4 cars + 4 cars + 4 cars + 4 cars + 4 cars = 20 cars but not 20 dollars.
"Classroom Discussions" authored by Chapin et al. begins with a class for learning the commutative law of multiplication (https://books.google.co.jp/books?id=2NX4I6mekq8C&pg=PA3). On the way, a student of the class named Eddie held "two bags of five apples" and "five bags of two apples" up as an example, whereas another student Tiffany said "But you still have the same number of apples! So they do mean the same!" There the teacher attempted to sum up their arguments, and asked Tiffany: "are you saying that those two number sentences can't be used to describe two different situations?" If a goal of this class had been to learn that 2 x 5 and 5 x 2 represent the same thing, the teacher would not have asked such a question.
The order of multiplication has been argued over several decades in Japan. If you can read Japanese and would like to get a grasp of typical critical remarks, gain access to Gen Kuroki's exposition (http://www.math.tohoku.ac.jp/~kuroki/LaTeX/20101123Kakezan.html) and Makoto Takahashi's publication (isbn:9784000295802). In contrast I have written blog articles in favor of the present multiplication instruction: http://d.hatena.ne.jp/takehikom/20131117/1384646400, http://d.hatena.ne.jp/takehikom/20111224/1324659582. We can find the difference of a x b and b x a in English-translated Japanese textbooks of arithmetic: http://www.globaledresources.com/resources/assets/042309_Multiplication_v2.pdf, https://prezi.com/nb3iphyd3sio/introduction-of-multiplication/.
It may be useful to focus attention on where the commutative law appears in an argument. Those who complain about the incorrectness of the red-pencil seen in imgur's picture often think that although a x b and b x a are different literally, a x b = b x a should hold by the commutative law. On the other hand, people for it seem to understand that even if they accept the commutative law of multiplication, a x b and b x a represent different things.

Brett adopted the two expressions in JavaScript, "4"==4 and "4"===4, to clarify the difference between equality and identify.
Interestingly, we can see the order of multiplication in programming languages. But it is so hard to search for the language in which the evaluation value of 5 * 3 is not the same as that of 3 * 5. Examples are, though, found in the case of the magnification*2 of a string. For example, the single-character string "5" multiplied by 3 makes "555". Note that this is the repeated addition of a string, i.e. "5" + "5" + "5" equals to "555".
When I fed expressions to interactive shells for Perl (perl), Python (python), and Ruby (irb) that run under an Ubuntu desktop PC, the results were as follows:

There results are summarized in the following table:

Among these languages, only Python represents the commutativity in string magnification. The behavior of Perl follows that the left operand of "x" should be the string for multiplicand while the right be the number for multiplier.
In the Ruby's execution environment, the binary operator "*" actually calls the method where the left is the receiver (in the sense of object-orient programming) and the right is the parameter of the method. In fact, "5" * 3 and 3 * "5" are equivalent to "5".*(3) and 3.*("5") respectively. Since the method Fixnum#* in the notation of Ruby cannot take a string as the parameter, the interactive Ruby shell reported the error. And yet an experienced Ruby programmer is able to write a code so that a Ruby interpreter can evaluate 3 * "5" as "555".
Of course I love Ruby the best, because I have written a great number of Ruby scripts for research, education, and my personal interests, and because we can easily provide further function to existing classes.

In conclusion, I would like to propose observe multiplicative examples based on the following idea: even if we accept the commutative law of multiplication, a x b and b x a may represent different things. I am convinced that this viewpoint helps us understand multiplicative expressions seen in arithmetic/mathematics and programming more deeply.

With respect to the introduction of multiplication taught in elementary school, I recommend Greer's survey (isbn:1593115989 p.276):

A situation in which there is a number of groups of objects having the same number in each group normally constitutes a child's earliest encounter with an application for multiplication. For example,

Within this conceptualization, the two numbers play clearly different roles. The number of children is the multiplier that operates on the number of cookies, the multiplicand, to produce the answer.

Greer took one chapter of the book under his charge and supplied various examples of multiplication and division. It was cited in the review article of word problems (http://journal.frontiersin.org/article/10.3389/fpsyg.2015.00348/full) published this year.

*1:This is based on the problem consciousness described as "But, if they are viewed as magnitudes, it is not clear why 4 cakes x 15 cents yields cents and not cakes." in Vergnaud (1983), isbn:012444220X, and on an illustration example on blackboard ( 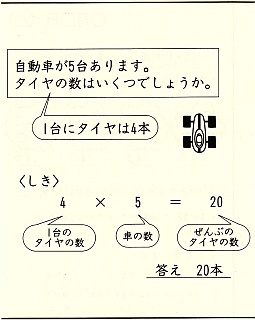 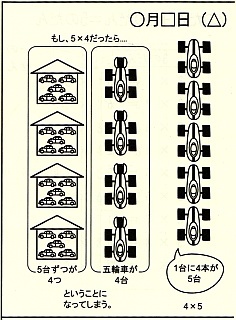 ) seen in the book isbn:9784491019376 edited by the math division of Elementary School, University of Tsukuba.

*2:This word might be somewhat inaccurate and the "repetition" is closer to the truth, since "abc" multiplied by 3 makes "abcabcabc" but not "aaabbbccc".